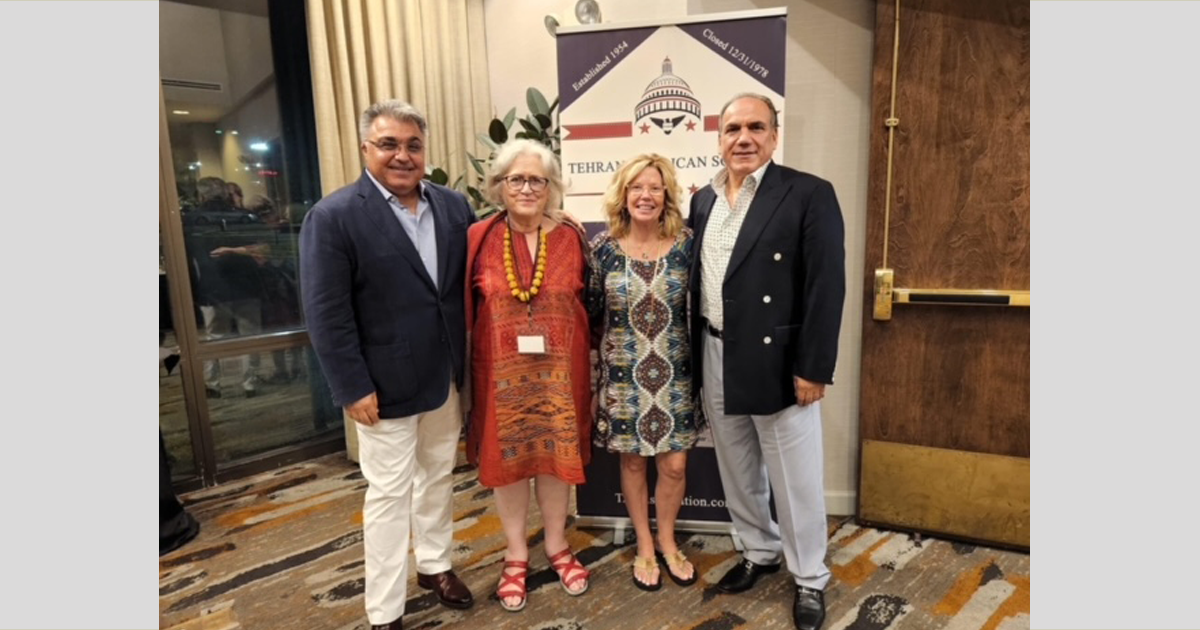 Jane Lewisohn was our 2nd speaker of the night. Jane lives in England and was visiting in California when she heard about our reunion. She was interested in meeting us and rerouted her trip to be able to attend. Jane gave a very interesting overview of how she came to live in Iran with her husband back in the 1970’s.

Jane pointed out in attendance were guests Keyvan Nouri and Shahrokh Mireskandari and that their mothers were famous Persian singers, Hayedeh & Elaheh. Side note: Hayeheh, Keyvan’s mother, has been widely described as one of the most popular and influential musicians of Iran. Elaheh, Sean’s mother, was one of the best-known female vocalists in Iran before the 1979 revolution and is known for some of the most popular songs in Persian classical music.  Their music can be found at Hayedeh & Elaheh Live In Concert by Elaheh, هایده & Morteza Hannaneh on Apple Music.

A Love Affair With All Things Iranian

Being art students, my late husband Dr. Leonard Lewisohn and myself were aware and enamored of Persian art, especially classical Persian poetry, Rumi, Hafiz, Sa’di and Attar. When we first encountered these poetic geniuses in translation, we were so overwhelmed we decided that if they are this good in translation we need to go right to the source and absorb ourselves in their language and culture so we can read them in their original Persian.

After graduating from Art college in Connecticut at the ages of 20 and 21 we set out for Iran hitching through Europe and Turkey finally reaching Tehran in the summer of 1973. We quickly made friends in Tehran and these friends invited us to go with them to the annual Shiraz Arts Festival. When we arrived in Shiraz it was like a dream Persian city, and we immediately fell in love with it. The family we were staying with offered to let us live with them in Shiraz. It was like a dream come true. There were only two ways to get a residence permit – one was through a work permit and the other was through a student visa. As a starving painter and a starving poet we did not have any qualifications for a work permit so we took the entrance exam (concur) for Pahlavi University and enrolled as full time students of Persian history and literature alongside our fellow Persian classmates, which was really jumping in at the deep end. For the next five and half years, we dedicated ourselves to absorbing as much of Persian culture as we could. Living with our Persian family and traveling with them all over the country on vacations, learning to cook Persian food and participating in all the family and cultural celebrations.

In December 1978 when it became clear that it was no longer safe for Americans to live in Iran as the revolution was in full swing and our presence become a source of possible danger for our dear Persian family. So on the first day after Ashura, December 1978, we left with one suitcase each on the first flight from Shiraz international airport for Bahrain and on to the UK and finally back to the US. We continued to immerse ourselves in everything Persian. My husband went on to get his PhD in Persian literature from London University specializing in Classical Persian Sufi Literature. We felt it was our mission to help others who would never have the opportunity that we had to fully experience the beauty, wonder, joy, and mysticism that was Iran – to know and taste this amazing culture. We translated over a dozen volumes of classical Persian Sufi literature, organized international conferences, concerts and poetry readings of Persian Sufis poetry and my husband became one of the leading academic authorities on Persian Sufi Poetry committing volumes of the verses of Rumi, Hafiz, Sa’di, Attar and others to memory, even studying classical Persian singing (Avaz) for 12 years till he mastered the classical vocal repertoire.

In the early 2000’s, I turned my energy to preserving and archiving the parts of Persian culture which were being outlawed and marginalized in Iran, especially music, theater, dance, and film archives of any performances before the 1979 revolution which were in serious danger of being lost forever. The Islamic government considers the performing arts, especially music and dance, as morally corrupt, particularly anything that had been performed during the Pahlavi period. They were not only not making any effort to preserve these cultural assets, but they were actively restricting access to them and in some cases destroying copies of them.

I began by archiving and digitalizing the iconic Golha radio programs with the support of the British Library Endangered Archives Program and the University of London. These contained examples of the finest singers, musicians, poets and reciters of the 20th century and are rightly accredited with saving and immortalizing Persian music and poetry. I went on to create an interactive searchable encyclopedia of a thousand years of Persian poetry and music based on the Golha radio programs featuring performances by the most talented and revered Persian female and male vocalists, as well as musicians and poets. This is now freely available on the internet at www.GOLHA.CO.UK and is used as a teaching aid in universities in Europe and North America. Even though the recordings of these pre-revolutionary classics are banned from the Iranian air waves the Golha project was awarded a prize for being the best Persian music website by the House of Music in Iran, which is the most important artists collective in Iran today.

While working on the Golha project and interviewing and getting to know the great maestros and divas who contributed to these programs, I was overcome by their sense of rejection and isolation. In the blink of an eye after dedicating their whole beings to their art, they were told you are no longer relevant and if you continue to perform you will be imprisoned or worse. I decided to do something to immortalize their amazing contributions to Persian culture, so in 2015 I began the Golistan project to create a world resource for Persian performing arts so these great artists and their contributions would not be lost and forgotten, to preserve a century worth of Iranian cultural assets and make them accessible to students and enthusiasts inside and outside of Iran. This work can only be done outside Iran because of the heavy hand of the Islamic regime censorship and their ideological prodigious against music, dance and performance arts in general.

We are archiving recorded music from the early wax cylinder recordings of the 1880s, the 78 and 45 rpm recordings, cassettes, radio programs reel to reel recordings and private archives, we are also archiving all the feature films and TV programs screened in Iran before the 1979 revolution as well as documentary films and films of concerts and music festivals. We are also archiving printed matter relating to Persian performing arts like the many journals dedicated to film and music published before the revolution as well as festival catalogues, recording company catalogues and official documents and photographs relating to the radio, television, and theater.

Most of this material is either difficult or impossible to access even for students inside Iran. It is essential that this material be made accessible to those who are trying to write the history of 20th century Iranian culture. Particularly because the Islamic Republic would be very happy if it all disappeared.

We have registered Golistan as a 501(c)(3) public Charity in the United States and we depend on the support and contributions from others like ourselves who love Iran and want the rest of the world to realize what an amazing, beautiful and vibrant culture Iran had and has.

All these are cultural assets will be archived, indexed, searchable and freely accessible to all on www.GOLISTAN.ORG, and if you would like to help us show the rest of the world what a beautiful and important culture Iran has, you can donate through the website www.GOLISTAN.ORG by clicking the donate button or send a check to Golistan at the treasurer’s address c/o Golistan 5 Hawthorne Road, Po. Box 755, Stockbridge., Mass. 01262, U.S.A. All contributions are tax deductible.